The great tradition and experience of the Veneto brand in the bicycle market.

at the basis of the agreement between the two companies.

The company and historic Italian brand Bottecchia Cicli has been acquired by Fantic Motor S.P.A. The operation was concluded last Thursday, 7 July, with the signing of the transfer of ownership that sees Fantic Motor S.P.A. further expand its market horizons in the segment of "muscular" bicycles as well as electric bikes. This is thanks to the complete Bottecchia catalogue line, which ranges from racing, gravel and MTB bikes dedicated to professional riders, to e-bikes, and even city and trekking mascular bikes. Italian excellence encapsulated in a brand that is close to crossing the 100-year milestone.

An integral part of the operation was Deutsche Bank, one of the world's leading banking groups, which intervened to support Fantic in managing the acquisition financing through an operation structured by the Business Banking team of Bank For Entrepreneurs Italy.

Fantic also availed itself of the contribution of the consulting firm Be Advisor with the founder Renzo Berto and the Laura Famengo supported by the lawyer Davide Frau and Matteo Marciano of PWC Company.

The story of Bottecchia began in July 1924 when a young athlete Ottavio Bottecchia, a bricklayer by profession, amazed the whole world by becoming the first Italian to win the Tour de France, wearing the legendary yellow jersey from the first to the last stage. A feat that led to the birth, in 1926, of the first racing bikes under the Bottecchia Cicli brand.

Over the years, Bottecchia has led great champions to success in the most prestigious international competitions. Two editions of the Giro d'Italia were won by athletes riding Bottecchia bikes: in 1966 Gianni Motta won the 49th edition and in 1979 Giuseppe Saronni dominated the 62nd Giro d'Italia and many prestigious international events. And then again Rudi Altid who won the World Championship in 1966 on the roads of the Nurburgring and the legendary Greg LeMond, winner in 1989 of an unforgettable edition of the Tour de France. There were also many victories with the first super-light bicycles, handmade in carbon, obtained with Stefano Garzelli.

Bottecchia has also always been involved in the world of racing. In mountain biking with the Bottecchia Factory Team MTB, and in road racing with the Drone Hopper Androni Giocattoli Team, an Italian formation that distinguished itself in the last editions of the Giro d'Italia, and that became 3 times Italian Champion in the last 4 years. Collaboration renewed again this year, the sixth consecutive year, with a leading team on the international cycling scene that has always accompanied young talents.

"Bottecchia has distinguished itself over time for continuity, solidity, and absolute quality," explained Mariano Roman, CEO of Fantic, "and continues to be in an extremely positive trend. The acquisition by Fantic took place in a logic of product range completion, building on Bottecchia's experience in the production of bicycles with a range of absolute quality products. Bottecchia also boasts a highly structured sales network with over 1500 dealers worldwide. Given the esteem in which the current owners are held, and the great professionalism and seriousness they have always demonstrated, the entire management team has been confirmed, as well as all the current employees working for the company. Full support also for the Racing Department, the Bottecchia Factory Team, which will be reconfirmed and strengthened in the coming seasons".

Tiziano Busin, President of Fantic comments: "This acquisition is to be considered strategic in order to strengthen especially the Urban E-bike area where the market is increasingly expanding. Bottecchia will allow the Fantic group to exploit important production and commercial synergies that will be created in common".

Marco Turato, Sales Director of Bottecchia Cicli srl adds: "The history of the brand, the experience and the knowledge gained in the last 20 years of Bottecchia management are an invaluable value of this company, which allowed us to achieve important results at international level. Our entire team is excited about this important project with the Fantic Motor S.P.A. group, a market leader that has achieved exponential growth in recent years. Today's market requires more and more skills, technologies and resources, which only large groups can provide. This is why the acquisition by Fantic will expand the capabilities and potential of both brands, to achieve greater goals together".

Bottecchia is also the owner of the iconic Graziella brand, which can boast illustrious testimonials of the calibre of Brigitte Bardot, which also comes under the control of the Fantic group.

After having launched the F.Moser brand in March 2022, created together with the champion Francesco Moser, Fantic adds with Bottecchia another strategic step in the world of cycling.

The horizons of growth and development marked by important milestones are thus increasingly broadening. In 2019 Fantic made official the strategic industrial collaboration with Yamaha Motor Europe, at the end of 2020 came the acquisition of Motori Minarelli, passing through the increasingly relevant commitment in the new 'green' era. It is precisely in the latter that Fantic has already distinguished itself with innovative and cutting-edge Urban Mobility solutions such as ISSIMO, the TX2 electric scooter, while anticipation is growing for the planned launch at the end of this year of the revolutionary new urban electric vehicle, completely developed and produced in Italy. 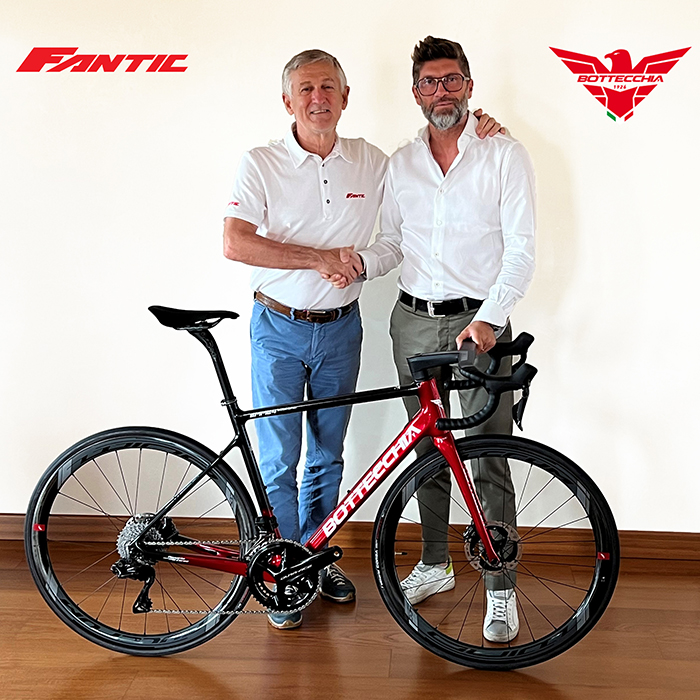