CABALLERO, a legend that became a star on and off the road again thanks to Fantic, is ready with the new Model Year 2021. The personality of the bike, the harmony and elegancy of the lines, the ease of use and the  handling are at the base of its incredible success on the market. Here are the new Euro 5 versions for CABALLERO 125 and CABALLERO 500. Fantic offers an even wider range of customisation based on the user’s style and way of living their motorbike.

CABALLERO 125 - The brand new Minarelli engine, which is mounted on the 125cc 4-stroke motorcycles of the Veneto-based motorcycle manufacturer, makes its debut. A high-tech engine with higher performance than the previous Euro 4. At the heart of the change are the EFI injection system, the Variable Valve Actuation system and the slipper clutch.  The VVA System, thanks to an actuator, allows the engine to always select the best performing cam at any speed, guaranteeing the maximum acceleration at any time.

New are also the cooling system (expansion tank and radiator) and the Euro5 compliant exhaust, featuring a carbon fibre heat protection. The light switch by Domino was also updated, and positioned on the left side of the handlebar; on the right is the switch with starter, kill, and ABS on/off button. The new saddle offers improved comfort and ergonomics and is equipped with an easy-fastening system. The updated license plate holder offers greater protection from the rain. The Scrambler and Flat Track versions have new side number plates that give the bike a new look.

Based on the user’s riding style and passion, three versions are available: the Scrambler and Flat Track (which features a choice of two colours, New Silver or Matt Black) versions are joined by the Deluxe version. A motorcycle embellished with aesthetic and functional details, introduced earlier by its bigger sister 500cc. It is ideal for moving around the city and at the same time also suitable for trips out of town.

CABALLERO 500 - Here is the long-awaited Euro 5 compliant update even for the queen of the single-cylinder 500cc, the CABALLERO 500, that brings with it many important improvements. So here are the optimised ECU, exhaust and cooling system. The engine is the robust 450cc single-cylinder four-stroke liquid-cooled with EFI, which has new gear ratios, optimised to ensure an even readier bike in every situation. The cooling system is also new. The Euro 5 compliant exhaust system has been improved too. The chassis has not been changed, as it has now become a reference point for the category thanks to its handling, agility and ease in mixed use.

The light switch control by Domino was also updated, and is now mounted on the younger sister 125cc as well. Among the different versions, the new foamed saddle varies in colour and cover, and is equipped with an easy-fastening system. The license plate holder has also been updated and offers greater protection from rain and mud. The Scrambler and Flat Track versions have been equipped with new side number plates.

The Scrambler version has a new look thanks to the new side number plates, as well as its sister Flat Track, also available in the brand new Silver colouration. The Rally 500 version, the most off-road version is also available in 2 colours now: Matte Sand and the loved Army Green. The 500 Anniversary Edition version was also confirmed, an icon that celebrates the history of the CABALLERO brand, in Red or Light Blue version. 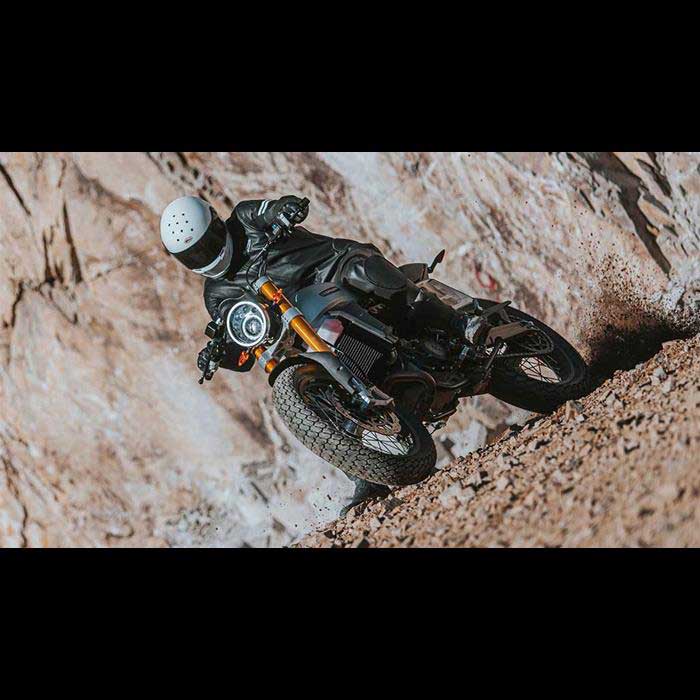