The valiant veteran of the desert stoically leads the new Fantic XEF 450 Rally to the finishing line in the most challenging Dakar of the last years.

Unlucky experience instead for the rookie Alex Salvini who, after a good start, is forced to retire, in the eighth round, after having collected a series of unfortunate events.

Premature retirement for the popular youtuber Tiziano Internò who stumbles into the wrong stone at the 26th kilometer of the first round and is forced to retire.

The Dakar ended on Sunday 15th of January on the podium of Dammam, could be faced only by hard men. Those Macho riders who crossed Saudi Arabia from west to east with unexpected weather conditions, continuous program changes and all kinds of adversities.

Without respite and fear, the margin of error granted to each rider was minimal, among long rounds, blind navigations and special fast rounds.

Franco Picco, Fantic Racing Team rider, needed a lion’s courage, a spartan determination and his great riding technique, to bring the Fantic XEF 450 Factory on the final podium in Dammam, combining all the best of his experience with the excellent technical and chassis features of his bike.

In the last two rounds, then, the Venetian rider showed all his stoic and indomitable fortitude, bearing the pain of a thumb fracture of his right hand, caused by a fall as consequence of a dune jump.

Guided also by the energy of his fans who made him feel all their support and admiration on social media, the sixty-seven-year-old No. 67 of the Fantic Racing Team concluded the Dakar 2023 confirming the 72nd position of last year, the 8th in the Veteran class.

The finishing line, crossed by Picco, has a double value: first he completed his 29th Dakar at the age of 67 and then he positively concluded the development of the Fantic XEF 450, a bike equal to the production one, able to face the most extreme challenges. The rally project started in 2021, the prototype debuted in the previous edition of the Dakar and was then developed during the World Rally-Raid Championship, always with Picco’s support. The production model which was presented at EICMA 2022, the Fantic XEF 450, in the Factory setting, also concluded the demanding Dakar 2023. A result that rewards not only the stubborn rider from Vicenza but also the commitment of the dynamic development team, its racing department and the whole Fantic Motor.

"It was a really tough Dakar," said Franco Picco – painful but satisfied - at the finishing line, " I was in trouble several times, but I gritted my teeth. I never forced and I did not worry too much about the standing, as my first goal was to arrive at the end. With those weather conditions it was not easy to keep the right pace but, I have to say, they helped to test well the bike in extreme conditions. The test was successful and the bike proved to be particularly reliable and fast. I am very pleased to see how everything we tested, over the past two years, was transferred to the "Factory" production version and worked so well.

From mid- race onwards, I make group with other Italian riders: we rode together, helping each other in the most difficult sections, I absolutely have to thank them! When I fractured my thumb the doctors tried to convince me to stop, but two days to the end, with the finishing line so close, I did not listen to them: I suffered terribly but I'm here, I did it!

I have to thank everyone in Fantic: the racing team, the development team and all the mechanics as they did a wonderful job. On the other hand, I am sorry for my teammates: unfortunately, pitfalls are always around the corner in the Dakar race. Just a little to be out after having worked a whole year to be here."

It was, in fact, an unlucky Dakar for Alex Salvini and Tiziano Internò who were forced to retire during the first week, although they struggled to stay in the race. Two problems took Alex Salvini out of the scene: the enduro World Champion and multiple-times Italian champion, at his debut in the desert, got good day results until the top of the standings before his retirement. On the other hand, Tiziano Internò suffered several bruises and the shoulder dislocation after a bad fall in the special of the 1st of January.

Dakar 2023 closes here, but Fantic's adventure in the Rally world has just began! 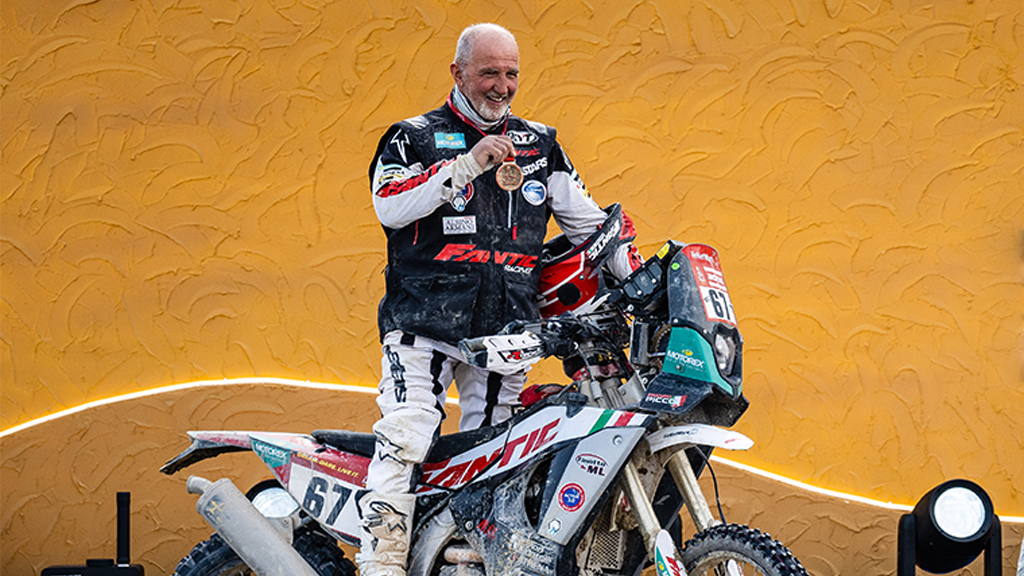